For the humility representative, we could have chosen Keanu Reeves, but he just got a new ladyfriend, so his ego must be boosted in the short-term. And he has been killing it in the John Wick movie franchise.

In case you haven't heard, Steve Carell is the nicest guy in showbiz. Mindy Kaling confirmed this in her 2011 memoir Is Everyone Hanging Out Without Me?:

It has been said many times, but it is true: Steve Carell is a very nice guy. His niceness manifests itself mostly in the fact that he never complains. You could screw up a handful of takes outside in 104-degree smog-choked Panorama City heat, and Steve Carell’s final words before collapsing of heat stroke would be a friendly and hopeful “Hey, you think you have that shot yet?” . . . Getting Steve to talk shit was one of the most difficult seven-year challenges, but I was determined to do it. A circle of actors could be in a fun, excoriating conversation about, say, Dominique Strauss-Kahn, and you’d shoot Steve an encouraging look that said, “Hey, come over here; we’ve made a space for you! We’re trashing Dominique Strauss-Kahn to build cast rapport!” and the best he might offer is “Wow. If all they say about him is true, that is nuts,” and then politely excuse himself to go to his trailer. That’s it. That’s all you’d get. Can you believe that? He just would not engage. That is some willpower there.

Let fans of Steve Carell discuss their love of the man for longer than one minute and 23 seconds, and they'll slide in the fact that he's just so humble. No hint of ego in that man, they'll say. Not. One. Bit.

Contrast that to Kanye West, our representative of ego. Kanye West is all ego all the time. Ego is the man's life source. Word on the street is that Kanye actually died in that 2002 car accident, but his ego has kept him going all these years later. If this is true, I estimate that Kanye's ego can sustain him until at least 2047 before his body has to accept the reality of his injuries.

If you need proof of Kanye West's ego, take a look at his discography. The man released eight albums of hippity hop full of profanities and sexual content and then turned around a released a gospel album, God Is King, and then went on Joel Osteen's show and called himself “the greatest artist that God has ever created”. If that ain't ego, I don't know what is.

In these extreme examples, it's so easy to fall in love with Steve Carell, Humility, and to be disgusted by Kanye West, Ego. Call me crazy, but I love Kanye West's ego. I love a guy who's not afraid to shake things up. I don't know why I'm like this. Mama tried.

Why does ego seem a word used only in extremes? Often, the presence of ego is seen as a negative while the absence of ego is celebrated. Extreme stances often miss the mark, and the usual feelings about ego are no exception. Ego should not be so binary, so either/or. Ego is a motivator, a driver, a call to action. Ego does need to be kept in check—this is where humility comes into the mix—but everyone should have a healthy dose and should work to identify his or her own flavor of ego.

Do you really think our beloved Steve Carell has no ego? I would argue that he simply chooses not to show it.

Ego says I can do something better than you. Ego says I have something to say, and I have the audacity to interrupt your day to bring you my message. Ego says to hit Publish or Send, to share your work. Or at least put it out there so that people have the opportunity to find it. 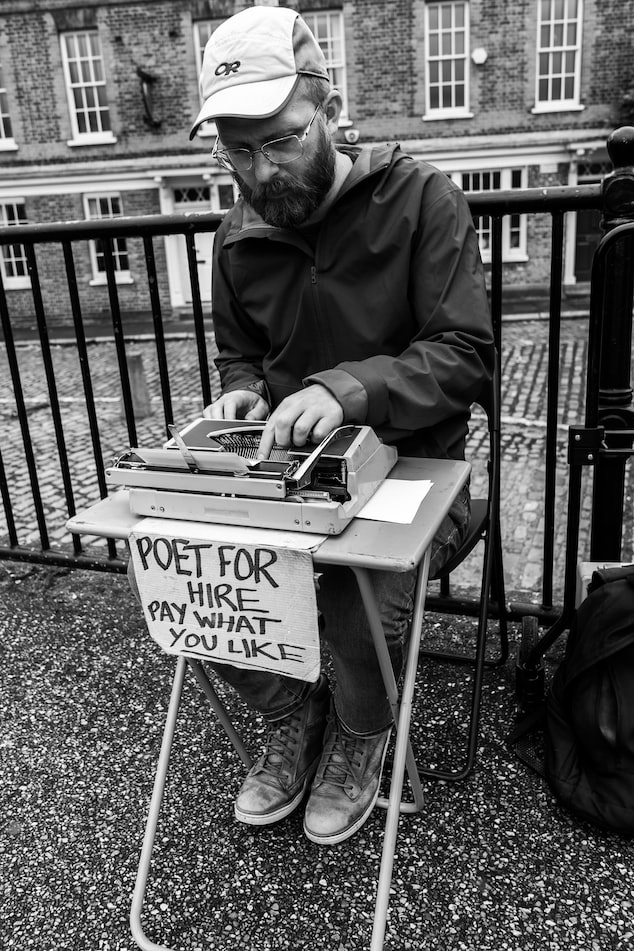 A poet's ego allows him to charge for his work. Humility lets him acknowledge he can't set his own price. Photo by Leonardo Baldissara on Unsplash.

I do not think myself egotistical, but make no mistake—I have ego.

And what of my own flavor of ego? What does my ego say? My ego says that I'm someone with life experience and perspective that others should listen to. I obsess over nuance, so I dissect unpleasant and mundane events alike and find life lessons along the journey. My ego says that I'm a poor man's Mark Manson, doing my part to combat the feelgood industrial complex and to promote healthier perspectives while limiting my use of F bombs and other profanities so as not to ruffle too many feathers. I can't be as bold as you, Mark Manson. I still have a day job.

On the flipside, I have humility and plenty reason to be humble.

Humility properly manages my expectations. Ego says that where I am today is not where I will be tomorrow.

For further proof of how wrong we as a whole have our concepts of ego and humility, look at one of my biggest pet peeves: the horrible misuse of “being humbled”. You are not humbled when you are granted an award and recognized for an achievement. You are humbled when you give your best effort yet are still bested by someone else. Maybe the other person was better prepared, or maybe the other person is more of a natural talent than you are. Either way, humility accepts the defeat. Ego says I'll get y'all next year.

If an artist wanted to do something only for the sake of it, then he would keep it private. But he puts it out there for a reason, if only to feed his ego, the fuel that keeps him going.

And let's not pretend that bookish writers are immune to ego.

Writing is an act of ego, and you might as well admit it. Use its energy to keep yourself going. – On Writing Well by William Zinsser