My son had asked the question so many times whenever we had gone to Frys, but I didn’t know as we got out of the car on a Saturday afternoon and headed toward the store that this trip may be the last time he would ask. I told him I didn’t have any quarters, which was a truth I would later regret.

Like most kids, my son has a habit of asking for a toy when one catches his eye at a store. A few years ago, I discovered I could satisfy his itch by putting a couple of quarters into one of those gumball-style vending machines near the exit of Frys. His machine of choice dispensed tiny toy ninjas in a variety of colors holding any of a number of weapons. 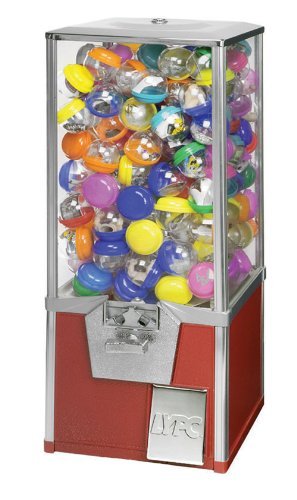 The possibilities are endless. Gotta catch ‘em all.

When we walked inside, the open part of the store which was normally filled with some sort of seasonal display was empty. Is the store closing? I joked to myself. Then I turned to my right toward the area where the PC builds and components could usually be found but became concerned when I saw nothing PC-related. Instead I saw paper goods and stationery. No big deal, they’re just rearranging, I thought. That also explains why some of the shelves are empty, right?

But the explanation could not explain so many empty shelves, and it definitely could not explain why the back corner of the store, usually populated with rows of monitors and laptops, now had only a few measly offerings.

Likeness has been altered to protect the innocent

*This place is closing*.

My fears were all but confirmed when I noticed that the Xbox games aisle was a ghost town.

No one planning to stay in business lets the Xbox game supply get that low. Your local Sears keeps a healthier stock of video games, and we all know it’s only a matter of time before Sears is taken out back like Old Yeller. I pulled out my phone and conducted a quick Google search only to discover that Frys corporate is denying any closures despite customers having similar experiences at stores around the country.

I often read about stores closing and retailers folding but I rarely bat an eye. This is the first instance I recall ever affecting me since I’ve wasted so much money at Frys over the years. On second thought, maybe I shouldn’t mourn the chain’s potential demise. I’d have a lot more money lying around if the store had gone under earlier. (Who am I kidding—I would have spent the money elsewhere.)

My wallet aches when I think about all of the needless stuff I bought there: monitor arms, computer risers, PC cases, a NAS. How many cables? How many adapters? How many ninjas?

Yes, there’s that element—the emotional element. When I think of Frys, I think of weekend mornings and afternoons spent with my son browsing the store. I think of his getting bored and begging to go and my bribing him with the promise of a 50-cent toy from a gumball vending machine if he will be good and give me time to look around and daydream and maybe waste some more money.

I had told myself we should return to the store the following day so that I could buy him one last ninja. But that didn’t happen because life happened and I guess I kind of got over it.

It’s eerie exploring massive stores that will soon be empty. Seeing bare shelves and display spaces adds an element of horror to the shopping experience. Like ghost towns, such stores are reminders that the good times don’t automatically last forever. Technology and economics are progressing and shifting every second and what works today is not guaranteed to work tomorrow. So stores are closed and jobs are lost and square foot upon square foot of retail space becomes a concrete wasteland to be abandoned potentially for years or even decades. All that space sits unused and becomes an eyesore to anyone who ventures by.

And any time a retail location closes, we all look to the retail Baba Yaga, Amazon. I understand the arguments against Amazon and I’ve made the case at different points. But damn, they make it so easy and I don’t have the strong convictions that I know I should have. At least I can be honest about it rather than projecting that everyone else is the problem. I own my place in the proper camp.

Maybe my local Frys won’t experience such a dire fate. A few months ago, my local Tom Thumb closed down only to be re-branded into an El Rancho. I remember that same eeriness when I browsed the empty shelves at Tom Thumb and I remember many of the same thoughts about commerce and change and the employees who become casualties. But ultimately the grocery store’s fate wasn’t so grim—it merely adapted to better serve different demographics.

Maybe the explanation from the Frys corporate office is valid. Maybe their shelves are empty because they’re in the process of changing their business and supply model and maybe the transition is taking a bit longer than anyone would like.

It’s silly to lament the possible closing of an electronics store. But it’s another reminder of something I’ve learned during my grief journey: We are unaware of the comforts in our lives we take for granted. We are ignorant to the assumptions we make and the expectations we have about our daily lives. All it takes is one or two fundamental changes to disrupt our lives and our identities. And we’re living in an era of rapid change in nearly every facet of existence.

This is not to say that change is bad. But it is disruptive and it takes time to adapt. There is a cost for change, but even the very best change brings its own share of unintended consequences that negatively impact someone.

We call them “growing pains” for a reason.